The new Pinball Arcade table is here. It could probably signal the end of season 6 since we are now reaching release number 60. This does not mean that there are just 60 tables. in fact, since seasons 1 and 2 had mainly two tables per release we have now 82 recreated tables plus an original one (that of Dr. Who, Master of Time. Anyhow, the new table is Cactus Jack's 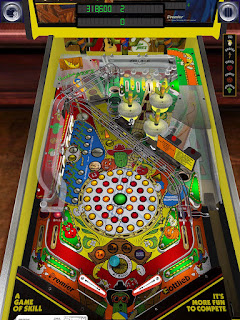 It's an oldie and thus it should a priori be to my taste. Unfortunately I could not relate to this game. The table is too gaudy, the ball drains all too easily and I just could find that many interesting things to do in the game. The only feature that I really did appreciate was the 2-ball multiball that you can obtain very easily. It does, somehow, compensate for the ball  drain.

One advice. While I usually try new pinballs with mute on, I did slip this time and left the sound on. Don't do it. If you wish to appreciate what is there to appreciate do turn the sound off.

Posted by Vasilis Grammaticos at 08:59 No comments:

If you follow this blog you may have surmised that I consider the ProPinball revival a total loss. Three years of efforts led to Timeshock running on MacOS and iOS with the same old physics (which to be fair is perfectly OK as far as I am concerned) and the hope of seeing the remaining Pro Pinballs revived becoming more and more remote. A few months ago the developers went into radio silence and I considered this as last nail on the coffin of Pro Pinballs. The situation has not changed since then. However a new announcement is making the rounds and one may interpret it as a positive sign for the revival of (at least one) Pro Pinball.

Arcooda is an australian company specialising in gaming hardware. They recently announced a video pinball machine. It definitely looks great (but I shudder at the thought of the price). Of course having a pinball machine one needs pinball games and thus the Arcooda cemented a partnership with FarSight which will make the Pinball Arcade tables available on the video pinball machine. (Yes, I know. I should have reported on this earlier, but I only came to realise this once I got wind of the Arcooda-Barnstorm partnership).

A few weeks ago Arcooda announced that they had secured Timeshock for their video pinball machine. This is of course a tribute to the great Pro Pinball line since Timeshock is the only virtual pinball of the collection, the FarSight ones being recreations of real pinballs. The announcement is enthusiastic. In the words of the Arcooda CEO:

“Pro Pinball is one of the premium titles available as a video pinball table with a rich history. We are extremely happy to be working with Barnstorm who are adding additional features to an already feature packed pinball game software. When combined with our machines, it will play and feel like a real pinball".

This announcement is just a few weeks old, so the fact that it says that additional features are being added to Timeshock might be interpreted as meaning that the Pro Pinball line is not dead yet. I will definitely not cross my fingers (being of the pessimistic persuasion) but at least there is now something one can look forward to.
Posted by Vasilis Grammaticos at 09:11 No comments:

Pinball Arcade got a new name

The last update of Pinball Arcade on iOS was accompanied by a renaming of the app. Pinball arcade is now known as Pinball Arcade Plus. The new version, 6.8.5, is supposed to bring updated tuning, a plunger button, updated sounds and some fixes. 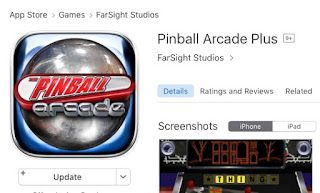 I don't know what spurred the renaming of the app. My guess is that since recently we have seen several iOS pinball games incorporating the moniker "arcade" into their title or their description, FarSight opted for the "plus" qualifier in order to distinguish their app form the intruders. A simpler explanation could be that, since there exists a free version of the Pinball Arcade, FarSight decided to make a clear distinction by renaming the paying version as "plus".

As to what are the real improvements in this new version, I guess we'll have to wait and see.
Posted by Vasilis Grammaticos at 08:37 No comments: