The new FarSight pinball is out.
Just after the Kickstarter campaign for Dr. Who completed successfully (they managed to collect 70 k dollars which was indeed what they were needing in order to port this table: they had planned to use the Addams Family over-pledge in order to bring the amount required to a more modest 54 k) the FarSight production line released a new table: Hurricane. 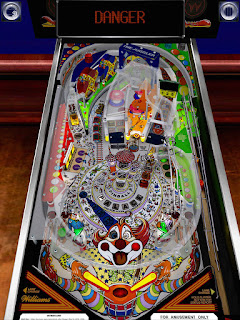 The table's theme is amusement park based. It features all the standard attractions: Roller coasters, Ferris wheels, shooting galeries etc. The one feature that I did like most was the revolving, back-glass, wheel. For once I am including a screenshot of this as well. (Perhaps I should have been doing this more often). 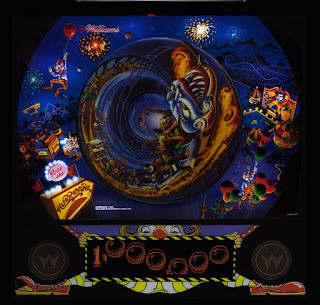 The game is perfectly playable in particular with the green ball. The playfield is uncluttered and the presence of the ramps adds just enough difficulty (and spice) to the game play. This is one of the FarSight tables that I did like. (And, to tell the truth, most of the time my criticisms are targeted at FarSight's sloppiness and not at the games themselves).
Posted by Vasilis Grammaticos at 12:28 2 comments:

My friend Nick posted a comment on my post on FarSight's two superb oldie tables that were released a few days ago. In his comment he is venting his 100 % justified indignation at the crapware that keeps appearing in Apple's App Store.

I have written about it saveral times: not everybody can build a fine pinball game. Unfortunately with the advent of personal computers people started thinking that if they manage to have a decent physics engine and acceptable graphics they could produce a saleable digital pinball. Those people ignore everything of what makes a real pinball.

Nick is writing about two particular pinballs. The first is Chalk pinball 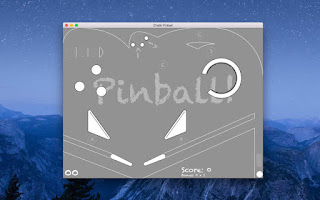 I must say that I admire the chutzpah of the developer. Asking money for that!? (Compared to this, paying for MagicShow pinball or the (in)famous Pinball of BaKno starts sounding like a good idea).

The second pinball is Snowball. 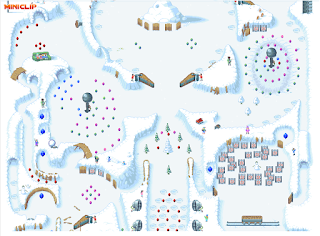 It is a flash pinball that you can play online for free here. Again, I wonder who in their right mind would spend money for this.

I prefer to keep playing Tristan, that 25-years-old classic form Littlewing (a company that has, alas, folded more than three years ago) rather than spending one minute with those "novelties" that led to the perfectly justified reaction of Nick's.

I have been closely monitoring FarSight's Kickstarter for a Dr. Who table and crossing my fingers. In fact I was extrapolating from the state of the pledges every day or two and I never managed to reach beyond 50 k. Thus I was really pessimistic about the fate of this great pinball. 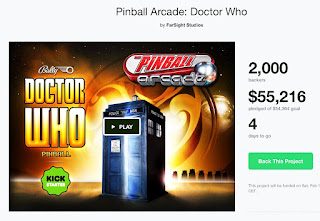 And then, with only a few days to go, there was a pledge spurt and within two days the goal was reached and passed. Sometimes it pays to be optimistic (but I think the extra tiers proposed by FarSight with four days to go added some incentive for those who still hesitated).

Posted by Vasilis Grammaticos at 00:18 No comments:

This month FarSight has reserved a pleasant surprise for us all (well, at least for myself). Instead of the stingy, single table, release we got a double treat with two oldie tables. The first, ElDorado, 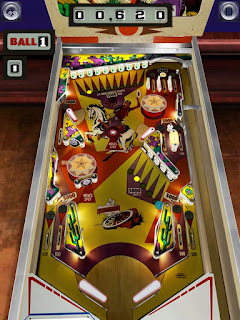 is a classic. Its playfield was used in several tables which have become classics on their own right. ElDorado, City of Gold is one of those, and has already been released by FarSight. While I hated City of Gold because of the garish colours that were making the choice of a visible ball practically impossible, I did like ElDorado a lot. Of course the gameplay is somewhat simplistic, even by the 70s standards but I do appreciate an uncluttered playfield. My only regret is that the flippers do not seem to be strong enough and it is not always easy to reach the upper targets. 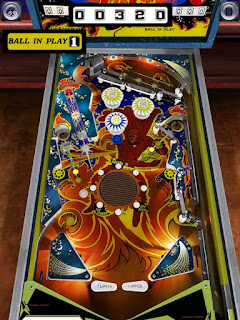 is more sophisticated, with a unique feature, the flipper-zipper. The zipper, when activated, moves the flippers close together making it very difficult to let the ball drain. A magnet spinner in the middle of the field shifts the ball to random directions.

Since I do like old tables, I did appreciate this release quite a lot. Moreover it showed that FarSight is not hostile at the idea of reviving old classics. So, there is hope that one day we'll see 8-ball Deluxe or Royal Flush as part of the Pinball Arcade.

Posted by Vasilis Grammaticos at 11:35 2 comments: